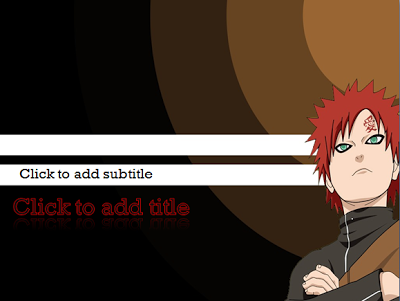 Gaara is the name of a fictional character in the manga and anime series Naruto. Gaara is a ninja who has the power to control sand. His trademark is a keg of sand that is always carried in his back and a tattoo “ai – love” on his forehead. Due to loneliness and lack of attention as a child, Gaara grew up without knowing love and thinks his purpose in life is to kill. But because the war against Naruto, making him change his mind. He became a better person, caring fellow, willing to sacrifice for the sake of peace and the village would become the fifth Kazekage. With a background screen that shows the good properties of Gaara, perhaps by this Powerpoint presentation you to be different and interesting to the viewer. For you lovers of series Naruto and fan of Gaara figure, download this template by clicking the link below, it’s free!